As the title indicates, I have explored status as a theme. The word status relates both to material values and to one’s standing in terms of reputation and position.How status is achieved varies with time and prevailing trends as well as social and geographic context.In my design and choice of materials I have aimed for close links with the theme. Hence it is possible to find aspects of meaning in many details of the jewellery.

The works cover a wide range of facets of the overarching theme: status related to material value, status related to sites and property, status as something that is actively reproduced in culture and the fact that, traditionally, the two sexes have acquired status in different ways.

Sites
Six finger rings; ash wood with print
Status is associated with geographic sites and property. That concept is reflected in these finger rings in the printed line drawings of architectural floor plans, lot divisions and landscape topography.
One’s bond to a site often springs from heritage and thus reflects a retrospective bond with tradition. In terms of form, the trapezoid cubes and rectangles point to modern architecture and thus adopt a progressive perspective. In this sense, then, the work is tensioned between two directions and addresses the duality of wanting to hold on to tradition while also striving for renewal.
Trees have a symbolic association with the concept of family, as expressed in the ‘family tree’ and in the notion of sinking down roots and branching out. The visible growth rings in the wood make it tempting to count years in relation to the life of the tree or a person. 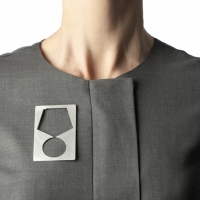 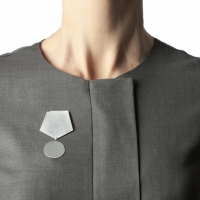 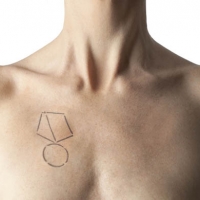 Medaglia
Two brooches, two necklaces and two stencils; silver, silk string and jade beads
The words medal and medallion both come from the Italian medaglia, which means a small coin. Thus, in a literal sense, the medal and the medallion are two sides of the same coin. Traditionally, they are considered gender-specific, and they may be seen as opposites: introvert/extrovert, feminine/masculine, acting/being.  Both must be characterised as jewellery that reflects status.

The medal is extrovert; it tells of the wearer’s achievements, actions that have earned the person honour and glory. These works are based on the classic military medal, a round coin suspended from a ribbon. Multiple medals may be placed side by side on the wearer’s chest. The medal has a strong and masculine expression. The intricate engravings and colourful silk ribbons add an ornate character that is retrospective in relation to contemporary ideals.
This interpretation uses a tight, graphic depiction with matt and shiny qualities as its sole effects. It has a sober and clear-cut expression; it’s action that counts, it’s not that complicated.

The medallion is introvert but definitely not invisible. As a locket, it has a certain secretive air, even if the thing it holds is so traditional that we all know about it: a tiny portrait, a lock of hair, a four-leaf clover… Tiny things that reflect a woman’s ties with the family, the traditional source of her status.
In this interpretation, the medallion does not have a hollow space but a shiny indentation. If you look into the indentation you will see your own face upside down, like a reflection in a spoon. The traditional eye has been stylised to a shape that resembles a keyhole or a ludo piece. The message is one of secrecy and of being a pawn in someone’s game. The two shapes are repeated in the lock. The silk string has red beads, which can be read as a counting of the family.

Absence. The opposite of the medal and the medallion as objects is their absence. The two objects symbolise our achievements and our family and thus reflect our social capital. A capital that one can hardly live without. To illustrate this, the shapes have been sawn out; empty holes in anonymous sheets of silver with the same shape and dimensions as a credit card.

Boldness. The medal and the medallion are very traditional and also elitist forms of jewellery. That notion is challenged by two of the works. They can be used as stencils for drawing on the skin or on one’s clothes. This lets anyone sport a medal or a medallion without having any particular achievements or family relations to their name, and they can draw as many as they feel like.

I count my days
Three necklaces; jade, serpentine, lava, silver and acrylic
The necklaces consist of 365 beads and thus symbolically represent a calendar year. The beads have been strung on thread with a tiny knot separating each bead from the next as an intentional reference to the rosary chain as a mnemonic technique. Two of the necklaces are patterned on the calendar structure. The necklaces represent different stages in life. They register lived life and thus relate to the concept of taking stock.

As long as a month of Sundays
The working man or woman’s calendar, where bank holidays and vacations are doled out according to tradition and collective agreements. There is little room for seizing sudden moments of opportunity.
The beads are made of lava and serpentine. Lava is black and matt with a beautiful vibrant surface. It is well suited for the burnt-out workdays. The serpentines have a faint greenish hue and different grades of transparency. They are well suited for the calm days off that are so necessary in our adult life. One end of the necklace has a bundle of numbers for counting up workdays, vacation time, weekends and bank holidays. Time is under control.

Carefree
This necklace represents the times in life when virtually anything is possible, and where plans can change in the blink of an eye. It is patterned on the calendar, but the colourful jade beads break up the otherwise rigid structure.
Tiny charms dangle off one end of the necklace: the word carefree, a heart and a key. A question mark to suggest a less than literal interpretation. And a red shoe referring to literary semiotics, where the girl with the red shoes is often seen as “getting into something” that she will not be able to control.

The first
The beads are made of jade, dyed in bright colours and resembling tiny, brightly coloured boiled sweets, which triggers a childish desire to pop them in one’s mouth. The necklace has abandoned the rigid calendar structure, and the colours are mixed at random. This illustrates the child’s perception of time, which is not boxed in by the calendar. One day simply follows the next in a seemingly endless flow of big and small events.  The girls who hit puberty early begin to count time once the menstrual cycle begins. In the necklace, this is illustrated with tiny series of identical red beads. 23 Xes dangle off one end of the necklace as a reference to counting in cycles.

Diamonds are forever
Two necklaces; jade, lava, silk organza and silver
Diamonds are a status symbol all over the world. Their indestructibility, rarity and strength are some of the key reasons for their appeal.
In this interpretation, the diamond shapes have been enlarged and made airy, delicate and destructible, for if the rarity and the indestructibility are removed, only the aesthetic qualities remain.  The carefully crafted diamonds are made in materials that are neither particularly rare nor particularly valuable. But the exclusive silk organza gives them a light, airy and transparent quality, creating a moiré effect, which adds an almost magical inner life, an ethereal beauty.
By virtue of their size and the fact that they are merely air, they flirt with the decadent and grotesque quality that also often characterises the large famous diamonds. The long necklaces are worn loose, strung casually around the neck.

The black diamonds are suspended from rough, black lava bead necklaces. The beads are made of magma that flowed red-hot out of the earth’s interior, suggesting a link to the origins of actual diamonds, which were created from carbon deep inside the earth.
The white diamonds have a clear and clean expression. The beads are white jade, which varies in transparency and has an inner life resembling a tiny snow storm.

Baton
Three batons with print; ash wood
As individuals we maintain our idea about what gives us status by taking it in and passing it on. The three ash wood batons are both dynamic and monumental in their expression as trapezoid rectangles that taper in at one end like obelisks.
The batons carry printed words characterising qualities as well as material and immaterial things that may serve as status symbols or as a source of personal status.

The material things have been anonymised, for example the word chair.  It is the capacity of language to create images that is put into play. Anyone reading the word will envision a chair. Different individuals will envision the particular type of chair that they perceive as a status symbol. And that is exactly the point: Status symbols are not fixed entities but vary with context, geography, culture and social class. The material things all relate to the home; this is intended as a reference to the sense of belonging and the advantage of knowing the unwritten codes for social status in a particular context.

On the two batons that represent qualities and immaterial status objects, the text has been presented in a graphic form that is harder to decode. This reflects the difficulty of decoding what is a source of status in a social community where one does not belong.

Nonsense
Bracelet, brooch and pendant; acrylic and silver
Taking stock means assessing one’s values. When goldsmiths take stock they weigh their gold and silver jewellery. But that only captures the value of “old” silver and gold while ignoring all the other parameters we also attribute value, such as theme, aesthetics or sentimental value.
The ‘Nonsense’ series addresses value assessment, and, as the titles suggest, gauges value in very specific measures and weights but with the quirky angle that the numbers say nothing about the actual value.

7 m of chair
Bracelet; acrylic and silver
The chair in itself is just a chair; it is the added value that turns it into a status symbol: the designer, the joiner’s workshop and the story. The chair’s form dissolves into a kaleidoscopic image where up and down, foreground and background are blurred. The tiny gap between the levels causes the image to shift when the beholder changes his or her point of view or rotates the object in his or her hands.  Similarly, our perception of the status effect of things is always changing a little, sometimes letting us down, when the thing we thought was really something is suddenly useless.

9 kg of ceramic art
Pendant; acrylic and silver
Seven ceramic objects were stacked randomly, which instantly challenged the perceived value: These are art objects; they were made to be seen as individual works.
The stack was photographed and turned into a two-layered collage. The colours blend, and the perspective begins to slip, the original set-up is no longer recognisable. Instead, strange and beautiful shapes emerge that one can hardly stop looking at. The irreverent treatment of the valuable gave rise to new value.

68 kg of heirs
Brooch; acrylic and silver
To their parents, children are particularly precious, and today, having well-adjusted children is also a status marker. Childhood is fleeting; once it is lost it can never be recaptured, and that makes it precious. The two silhouettes illustrate this point with their frozen motion. Additionally, they have been joined together in a rotary joint, which enables new movements and breaks down the recognisable silhouettes by varying degrees.
Childhood is also interesting in relation to the topic of status, as this is the time when we form the basic social structures that enable us to understand the achievement of status in our own particular environment. These learned social structures are not static, but it can be difficult to adapt to new environments later in life.